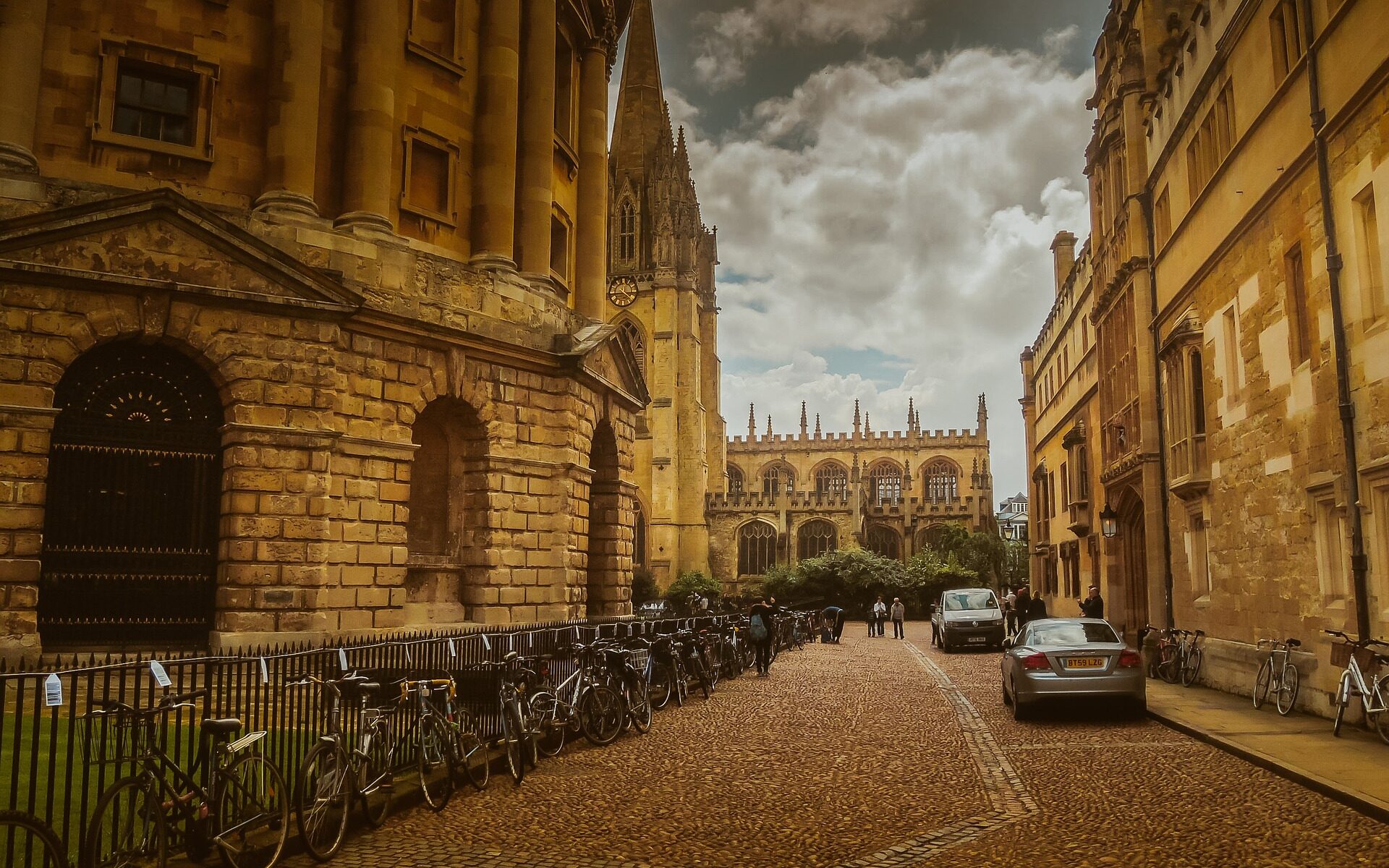 Explore locations from the hit TV and book series.

Our “A Discovery of Witches”/ All Souls Trilogy Tour takes the hassle out of discovering the best locations from both the hit TV series and the books. With a pickup option for both London and Oxford, our guide will show you Matthew and Diana’s Oxford, and explain how Deborah Harkness created the book series from her experience of visiting Oxford and studying at Keble College.

During the tour, we will explain the history of the locations that you are visiting, any unique points of interest, and of course, how they relate to both the book and TV series. There will also be plenty of opportunities to sample the local food and drink and soak up Oxfords unique character. 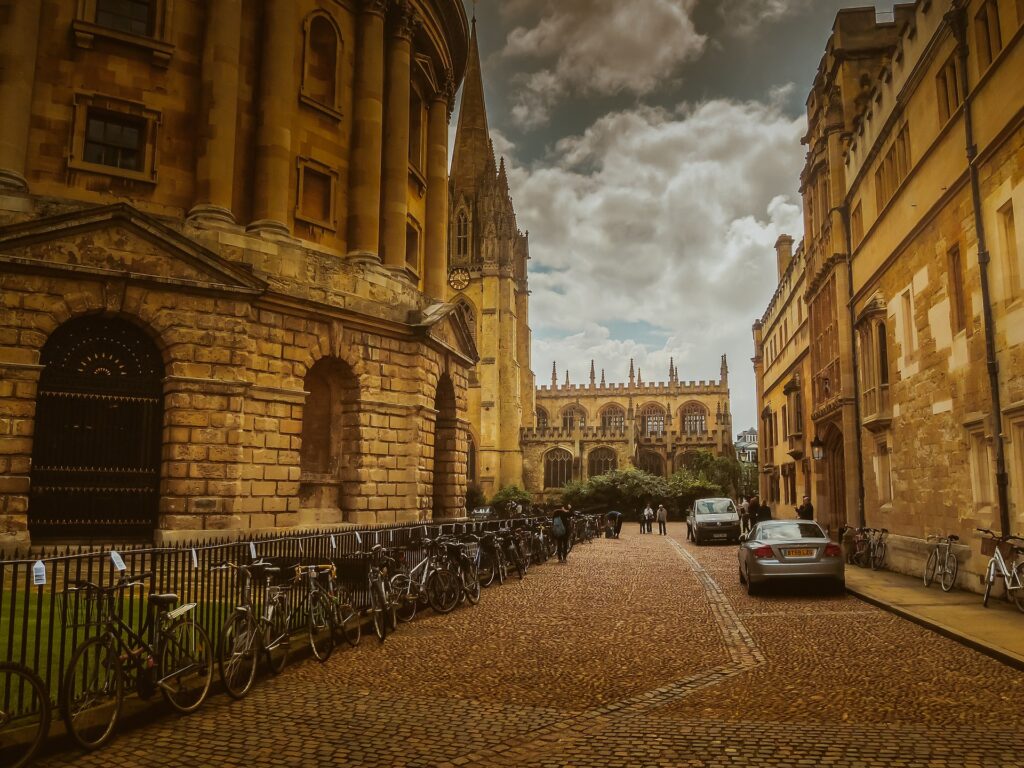 Oxford Covered Market Oxford Covered Market is home of the Brown Cafe. This highly praised cafe is the inspiration for the cafe where Matthew invites Diana for breakfast in the book of A Discovery of Witches. Seen in the A Discovery of Witches TV series, this Cafe will be our first stop, where you can get a quick bite to eat and drink before heading off on the rest of the tour.

Radcliffe Camera Radcliffe Camera is one of the most iconic buildings in Oxford. Part of the Bodleian Library, this building is sadly only accessible to staff and students of Oxford University. However, it does not stop us from enjoying this architectural marvel that is seen throughout series 1 of “A Discovery of Witches” and is somewhere that both Diana and Matthew would be intimately acquainted.

New College New College, or The College of St Mary of Winchester in Oxford to use its original name, is Diana’s college and is mentioned widely throughout the book and TV series of “A Discovery of Witches”. This beautiful college is one of the largest in Oxford, and whilst here we will explore both the buildings and grounds which Diana would be familiar with including the college’s cloisters, chapel (which offers unique features including a painted window designed by Sir Joshua Reynolds) and the great hall.

Turf Tavern The Turf Tavern is one of the lunch options for this tour and is a short walk from New College, The King’s Arms, and The White Horse. This pub, dating back to the 17th-century claims that it is an “education in intoxication” is operated by the Greene King Pub Company and is a favourite of students, and tourists alike. It’s said that Richard Burton, Elizabeth Taylor, Tony Blair, CS Lewis, Stephen Hawking and Margaret Thatcher have all drunk here, and it’s at this pub where Bill Clinton famously “did not inhale!” All three pubs (The Turf Tavern, The King’s Arms and The White Horse) can be visited on the day, and are either mentioned or seen in the book and TV series. Customers are welcome to choose between the pubs depending on their own tastes and preferences on the day.

Blackwell’s Bookshop Located opposite the Bodleian Library and the Sheldonian Theatre, Blackwell’s is a bookshop not to be missed. This Aladdin’s cave of learning offers every type of book that an Oxford University student, staff member, or visiting lecturer might wish for. Mentioned as the place where Diana goes for her lunch, we will give you time to explore Blackwells and purchase as many books as take your fancy!

Exeter College Exeter College is one of the filming locations for series one of “A Discovery of Witches”. This beautiful college is where Matthew and Diana can be seen walking together, with the college’s chapel behind them. Whilst here we can spend time recreating the scene so that you have an extra special photo to take home with you, as well as discussing the famous alumni of the college who include the literary giants J. R. R. Tolkien, Alan Bennett, and Philip Pullman.

All Souls College All Souls College is where Matthew has his rooms. Sadly most of the college is off-limits to visitors, but this won’t stop us from enjoying the publicly accessible quadrangle or “quad” where your guide will tell you about this unique college, its history and why it has no students!

Isis Farmhouse Our final destination before heading back to London is The Isis Farmhouse. This beautiful pub is a 10-minute walk from the closest parking, so please bring sensible footwear and clothing. It is here that Matthew meets Diana in the fourth chapter of “A Discovery of Witches” and discusses the number of creatures that are present in Oxford since the discovery of Ashmole 782. On a spring/summers day, we can sit by the river and enjoy one final drink in Oxford, in the autumn/winter we can sit inside the beautiful farmhouse and warm ourselves by the fire before heading back to Oxford. N.B. If the 10-minute walk to the Isis Farmhouse will be too much for you please let us know at the time of booking and we will allow extra time at each of the other locations in Oxford instead.