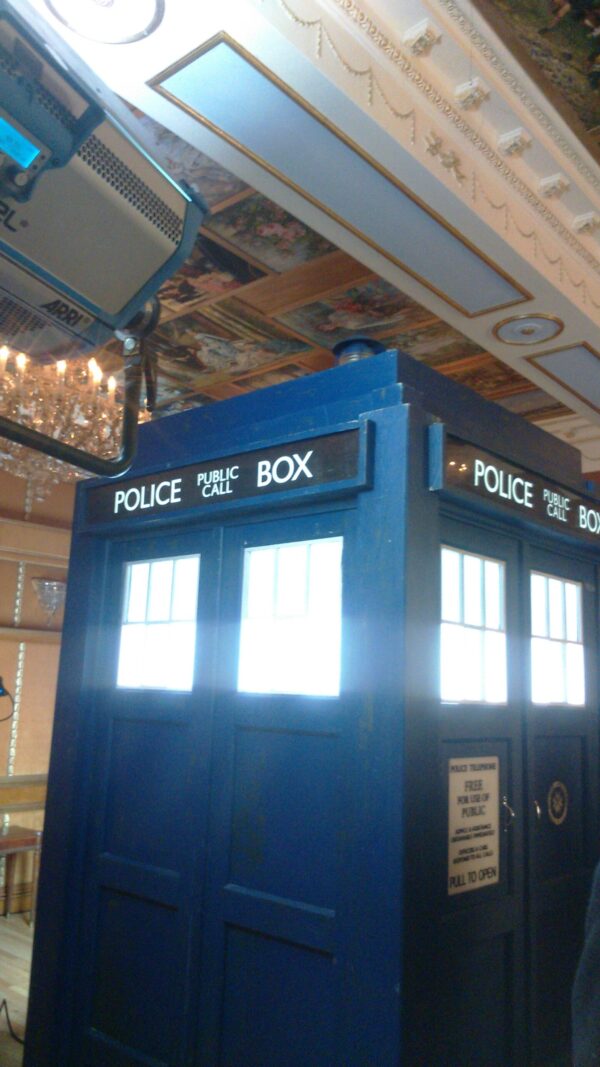 An Adventure in Space and Time

This tour offers you the chance to explore London with a guide who is as passionate about Doctor Who as you are. Along the way you will see some of London’s leading sights whilst hearing all about their links to the hit BBC TV series Doctor Who.

Led by an experienced tour guide, who was interviewed by the Doctor Who Magazine for their ‘On Location’ special edition, and who filmed with the BBC as part of their Christmas Doctor Who Ident, this tour is perfect for  Timelords, Daleks, Cybermen, and Sontarians of all ages.

Book Online Now
The Tardis
Where all good adventures start!
Shakespeare's Globe Theater
Doctor Who was the first TV series ever to film inside this fantastic theatre.
Shakespeare's Globe Theatre
Used heavily in the Shakespeare Code, find out how Shakespeare has more to do with Doctor Who than you would think.
The National Gallery In London
Home to the Under-Gallery where the painting Galifrey Falls/No More is stored.
Trafalgar Square
Home to many great Doctor Who moments, including scenes from The Day Of The Doctor
The steps on St Peter's Hill
Where Missy sat as the Cybermen took over the UK
Paternoster Street
is not how you imagine it to be. Find out why on this delightful Doctor Who Tour.
The Tower of London
Where the UNIT Black Archive is held.

Earl’s Court Our tour materialises at Earl’s Court Road, just outside Earls Court Station, where a Mark 40 TARDIS has been sat since 1996. After you have taken your fill of photos, your guide will explain the history of the Police Box, how this phone box came into being, and finally how thanks to the image of the TARDIS the Metropolitan Police Service and the BBC ended up in court.

Victoria Embankment At this location, we will discuss the first sequences filmed in London for the new series of Doctor Who, and some of the mistakes in the scripts of series 1. This location also gives you the chance to stand opposite the London Eye and recreate the famous ‘What?!’ moment from the very first episode of new who ‘Rose’.

Whitehall Whilst visiting Whitehall we will discuss how Doctor Who has become an integral part of UK culture, and how Harold Saxon became Prime Minister.

St. James’s Park As we walk through the beautiful St James’s Park, we will stop on the mall to discuss the links between Doctor Who and the Royal Family and how Wilf (Donna Nobel’s grandfather) was only ever supposed to be a cameo appearance in one episode.

Trafalgar Square Trafalgar Square, named after the 1805 battle of Trafalgar is home to the National Gallery and the under gallery where the painting of Gallifrey Falls No More is housed…. or is it?

John Adam Street John Adam Street is the filming location for No. 10 Downing Street in the Doctor Who episode Aliens of London and World War Three. This is your chance to pretend to be on the steps of the Prime Minister’s home and pose for the camera.

St. Paul’s Cathedral After travelling by public transport to St Paul’s Cathedral, your guide will explain how Sir Christopher Wren’s masterpiece and the surrounding areas have been used throughout Doctor Who, including in the two-part Dark Water and Death In Heaven.

Shakespeare’s Globe Theatre Shakespeare’s Globe Theatre, often called ‘The Globe’ by Londoners is not only a unique building in the heart of London but is also a site that is heavily associated with the 10th Doctor, David Tennant, his career and his personal life. While stopped outside The Globe, not only will your guide reveal how the theatre was used in the episode The Shakespeare Code, but we will also tell you how this unique London landmark came into being.

London Bridge Our final stop is London Bridge where you will be able to get amazing views up and down the river Thames. From here your guide will explain how the locations that you can see from the bridge were used in Doctor Who before allowing you to depart for the nearby Monument or London Bridge Stations. Duration: 10 minutes Admission Ticket Free