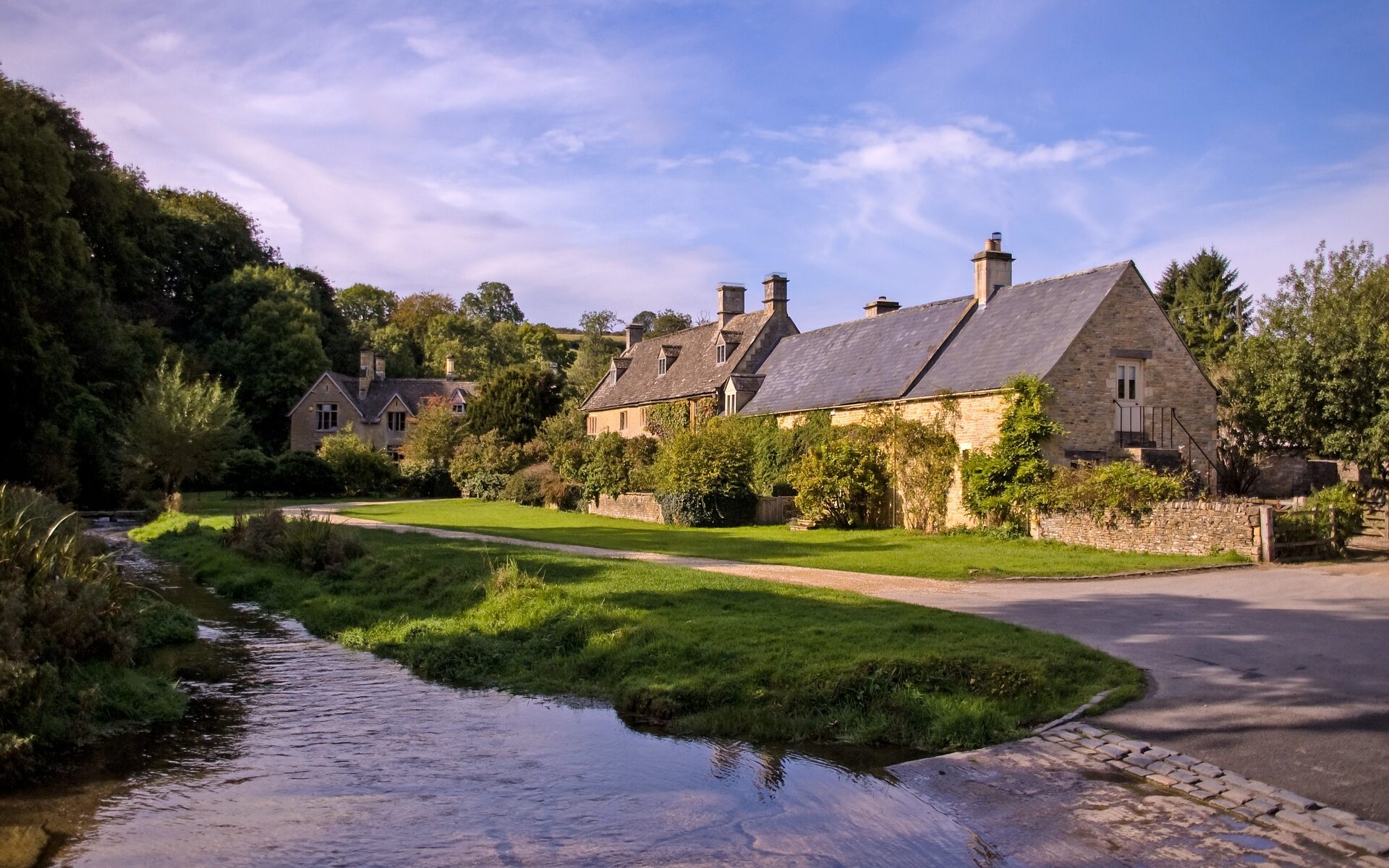 Spend a day exploring the beautiful and historic Cotswolds with this day trip from London.

We believe that there is nothing better than spending time in the country. The Cotswolds are regularly considered some of the best parts of the countryside to visit in the UK. Full of stunning scenery and gorgeous historic towns and villages made of soft creamy sandstone, many of the villages and towns included in this tour are regularly voted top of the best places to visit in the Cotswolds (and sometimes even the UK). This outstanding area is a must-see for anyone visiting the UK as it is full of wonderful wildlife and fantastic food. Just a few hours from London, this part of the UK has also served as inspiration for well-known artists such as John Singer Sargent, Elgar, and William Morris.

This day tour by car offers you the opportunity to see some of the prettiest parts of Britain with someone who is passionate about the past, loves to eat (and knows the best places to stop for food), and who knows where to take a photo that will make your friends back home jealous of this unique, almost perfect, day out.

Historic Buildings
are plentiful in the Cotswolds with some going back as far as the 14th Century.
Pose for Pictures
Your guide is always happy to help you take the perfect picture to make your friends back home jealous.
Fantastic Farmland
Views across fantastic farm fields like these are everywhere in the spring and summer.
Beautiful Flowers.
One of the many beautiful gardens we will see as part of the tour.
Local Food and Drink
is never far away on this tour.
The Bliss Mill
Bliss Mill in Chipping Norton

Woodstock Our tour begins by visiting the gravesite of Britain’s favourite Britain – Sir Winston Churchill. Unlike the other great national heroes who are buried in one of the famous cathedrals in London, Sir Winston is buried in The Parish Church of Saint Martin Bladon, close to where he was born. Whilst here your guide will explain just why Sir Winston is such an important (and sometimes controversial) figure. If The Parish Church of Saint Martin Bladon is open to the public on the day of your tour, you will also have time to see the Churchill memorial window which is housed inside the Church.

Chipping Norton Chipping Norton gets its name from the old English word for market and is the highest town in Oxfordshire. A market town since the 13th century and a significant Wool trading town during the 15th century, this lively Cotswolds town is also home to the famous Bliss Mill. The Bliss Mill is a one of a kind former tweed mill and is famous throughout the Cotswolds for looking more like a mansion or a folly rather than a factory. Whilst in Chipping Norton, you will be able to explore the beautiful shops and see the great wool church of St Mary. At St Mary’s Church, your guide will explain why these great wool churches emerged, why wool was so important to the local and national economy during the 15th century, and why Shakespeare has a supprising, if somewhat woolly link to this highly valuable elizabethian trade.

Moreton-in-Marsh Located on the Fosse Way, the old Roman road that linked Exeter to Lincoln Moreton-in-Marsh is one of the main market towns in the northern Cotswolds. This picturesque market town has held a weekly market since 1227, and this ongoing tradition now means that Moreton-in-marsh is home to one of the oldest markets in the United Kingdom. Like all Cotswolds villages, the local pubs in Moreton-in-Marsh are at the heart of the community and the town’s history. Whilst here you will hear how Charles I sheltered in one of the town’s pubs during the English Civil War, and how the author JR R Tolkien is believed to have been inspired by The Bell Inn when writing his famous work the Lord of the Rings.

Blockley Blockley is the midway point between Moreton-in-the-Marsh and Chipping Campden. This beautiful village was once a leading centre for the production of silk. Today, the village is regularly seen on the TV series Father Brown where the Norman church of St Peter and St Paul stands in as the fictional St Mary’s Church and where the local vicarage doubles as Father Brown’s residents.

Chipping Campden Chipping Campden like Stow-In-The-Wold, Burton-On-The-Water, and Burford (all places that you will visit on this tour) is regularly listed as one of the best places to see in the Cotswolds by bloggers and journalists alike. Overflowing beautiful buildings and fascinating history, Chipping Campden’s high street was once described by the historian, G.M. Trevelyan, as “the most beautiful village street now left in the island”. Today this high street is largely untouched as the wide and gentle arc of the road is fringed in a continuous stretch of buildings that date from the 14th century. With over 250 listed properties, including one that dates back to 1380, this delightful town is the ideal place to get photos that will make the folk back home envious of your getaway.

Broadway This picture-postcard village, which some consider to be the heart of the Cotswolds, sits within the Worcestershire hills, an internationally famous beauty spot. Recognised as an Area of Outstanding Natural Beauty, Broadway is a spectacular place to visit at any time of the year; however, it is particularly beautiful during the spring and summer when the local flowers are in full bloom. Infact this Broadway is so beautiful that it inspired artists such as John Singer Sargent and William Morris, the composer Elgar, and the author JM Barrie Broadway is obviously a place to visit if you are seeking artistic inspiration or just want to enjoy gorgeous settings which inspired so many great artists. During your visit to Broadway, not only will you have time to see the inspirational surroundings, but you will also visit the Cotswolds Distillery shop (where you can purchase some of their award winning Whisky and Gin) and hear about the Broadway Tower, an 18th-century folly that hides a suprisingly high tech 20th-century secret.

Stow-on-the-Wold An antique lovers delight and is the highest of all the towns in the Cotswolds Stow-On-The-Wold is famous as a place where antiques are bought and sold. Historically, however, things in Stow-In-The-Wold have not been so sedate with close combat fighting having taken place here during the English Civil War. Whilst at Stow-In-The-Wold, your guide will explain one of the most important battles of the English Civil War took place in the town, and how the local church of St Edwards still bears the scars of this famous fight. You’ll also hear how during the height of the wool trade in the Cotswolds, Stow-In-The-Wold was legendary for its market where over 20,000 sheep would be sold at one time and how today Stow-In-The-Wold is a centre for the Gypsy and Romany communities who gather here twice a year

Bourton-on-the-Water Bourton-On-The-Water is sometimes known as the Venice of the Cotswolds. Like the vibrant Venetian city, Bourton-On-The-Water is an excellent place to get photographs that will make your friends jealous of your trip. The gently flowing river Windrush is crossed throughout the town with several small and beautiful bridges, the perfect places to pose for a picture. The town is also full of a wide range of shops varying from jewellery to perfume and pottery which offers you the chance to pick up some perfect presents to take back home. Should you wish to spend a little bit longer in Bourton-On-The-Water, there’s also the chance to visit the local model village, a perfect 1/9 scale replica of Bourton-On-The-Water created in the 1930s or Greystones Nature Reserve, home to a wide variety of local wildlife, and site of the Neolithic and Iron Age encampment (which is now on the schedule of ancient monuments) which gives Bourton-On-The-Water its name.

Burford Our final destination on this tour is the stunning chocolate box village of Burford. Regularly voted as one of the top places to visit in the Cotswolds (alongside Stow-In-The-Wold, Bourton-on-the-Water and Chipping Campden) Burford includes pretty pubs, stunning shops, including a traditional sweet store, and traditional grocery and clothing stores. Arranged along a central road, which will take your breath away, the town of Burford was a favourite retreat for Charles II and his mistress Nell Gwyn and contains Britain’s oldest pharmacy, which opened all the way back in 1734.