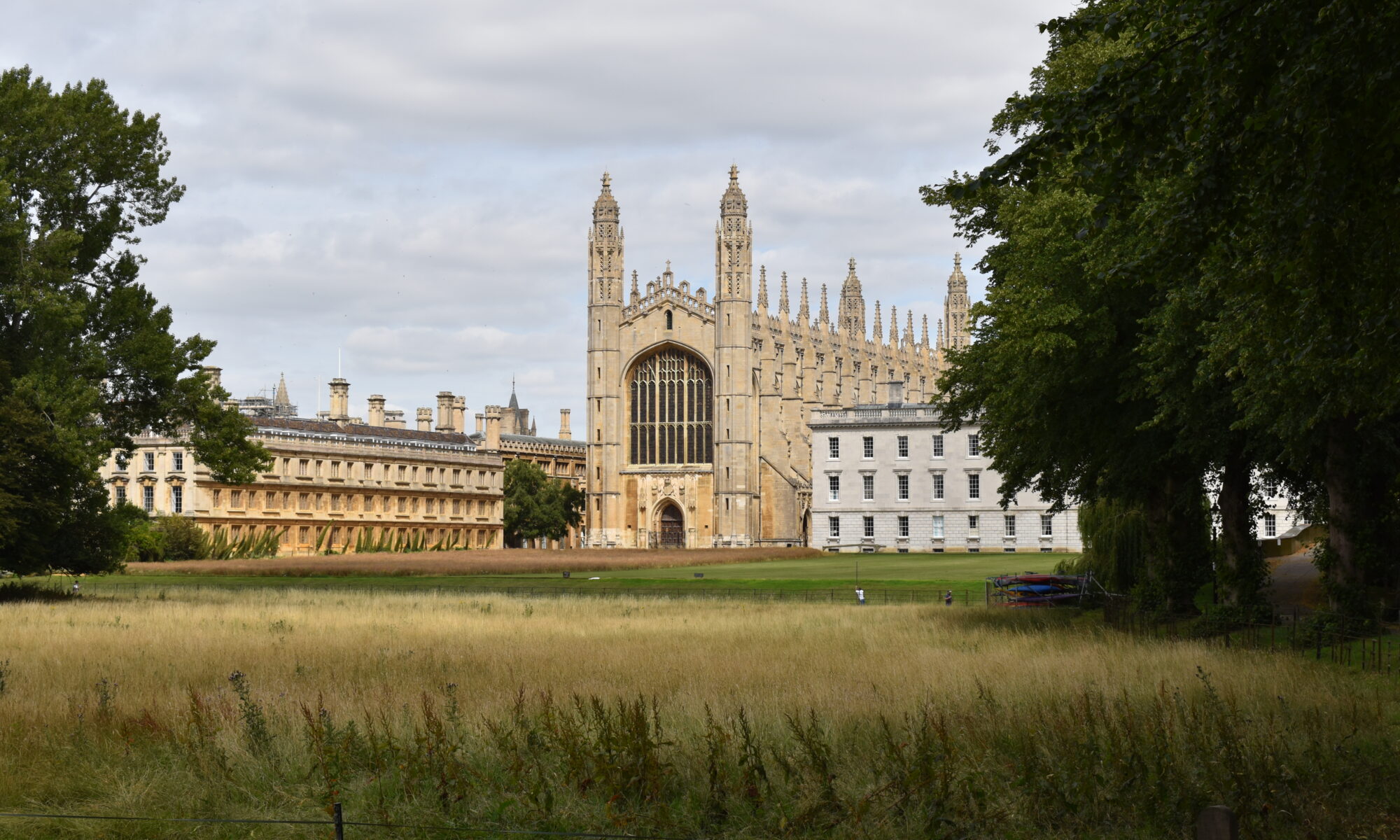 Explore Historic Cambridge, Home To One Of The World's Most Prestigious Universities.

We cannot wait to share beautiful Cambridge and its stunning colleges, beautiful pubs, and gorgeous views with you. Starting from your central London accommodation, your driver/guide will whisk you away to one of the oldest and most prestigious university towns in the country, where you will have the chance to explore some of the most renowned colleges. Whilst in Cambridge, you will explore Kings College and its awe-inspiring chapel, see an original copy of the King James Bible (one of the most important Christian documents in the world!), visit a pub which was popular with RAF crews during the Second World War, and learn how a group of Cambridge graduates, known as the Cambridge Spy Ring, almost destroyed the ‘special relationship’ that exists between the UK and the USA at the height of the Cold War! Taking in some of the most breathtaking scenery in the east of England, your guide will return you to London, making this trip stress free.

Book Online Now
Great St Mary's Church
This unique Church is both the University Church and a local parish church.
Stunning Views
Are available to those customers who are willing to climb to the top of the tower of Great St Mary's Church.
An Original King James Bible
This beautiful book dates back to 1611! When this book was published Shakespeare was still alive!
Explore stunning side steets
Wonder the streets like a Cambridge student.
Queens' College
Don't worry grammar geeks the apostrophe is in the right place as the college has been associated with numerous British Queens.
The Mathematical Bridge
Believe it or not, this bridge is made entirely of straight timbers which are self supporting.
Kings College
One of the many majestic views that you'll see on this tour
Another Stunning View
With the Chapel of Kings College in the background.

Great St Mary’s Church. Dating back to 1205, which the current building was built after a fire destroyed the original building during the 15th century. This gorgeous gothic Church is unique given its status as both the University Church in Cambridge and a local parish church. One of its many curious features is that it has two church organs, one for the town and one for the ‘gown’ or university. Whilst at Great St Mary’s Church, your guide will reveal the Church’s fascinating history, including how its restoration in the 15th century was part-funded by two rival kings – Richard III and Henry Tudor. Our visit to this Church is also your chance to view an original first edition King James Bible. Finally, those of you who are willing to climb to the top of the Church’s Tower have the option to climb the 123 steps and gain majestic views of Cambridge and beyond. Tower entry is not included in the price of the tour and is an optional extra.

The Eagle Pub ‘The Eagle’ is where Francis Crick announced that he and James Watson had ‘discovered the secret of life’ after they had developed their idea for DNA. This historic pub, originally founded in 1667, was also where numerous Royal Air Force and American Air Force Crews had their final drink before heading off on missions over occupied Europe. Today it possible to find their names graffitied on the ceiling of the RAF Bar, which is where we will stop for a drink, a spot of Lunch, and the chance to rest your feet for an hour before continuing on our tour. If you are curious to try a local British beer, your guide will be happy to help you make a choice that suits your pallet and your choice of Lunch. Please note that the cost of Lunch is not included within the price of the tour.

King’s College King’s College was founded in 1441 by King Henry VI, known as the ‘royal saint’. Renowned for the fact that for 400 years, King’s only admitted Etonians and that its students graduated without sitting examinations, King’s is one of the UK’s most prestigious academic colleges with alumni including Alan Turing and Zadie Smith. At King’s College, we will be able to explore the gorgeous grounds of the College before entering Kings’ Chapel, which is one of the stunning highlights of this trip.

King’s College Chapel King’s College Chapel is one of the most stunning sites of Christian worship in the United Kingdom. Considered one of the finest examples of late Gothic English architecture and renowned for having the largest fan vaulted ceiling in the country, this breathtaking building is the highlight of any tour of Cambridge. Whilst at the Chapel, your guide will explain the founding of the College and the Chapel, why the College is so closely associated with numerous Kings of England, and why the College would not exist without the help of one of Shakespeare’s most famous villains – the hunchbacked Richard III. Whilst at the Chapel, you will also have time to explore on your own, view the glorious stained glass windows and admire Ruben’s The Adoration of the Magi, which now serves as the Chapel’s altarpiece.

St. John’s College St. John’s College is home to the famous Bridge of Sighs, which crosses the River Cam to the rear of the College. Seen across the world as one of Cambridge’s most recognisable images, the Bridge of Sighs was described as “so pretty and picturesque” that no trip to Cambridge is complete without a chance to stop and take a photo. Famous alumni of the College include the abolitionists William Wilberforce and Thomas Clarkson and the poet William Wordsworth. One of the largest colleges in Cambridge, St. John’s was founded by the mother of Henry VII, Margaret Beaufort, who sadly died before the College was completed. Today the College is one of the best in Cambridge with 30% of students achieving a first. While exploring St. John’s College, we will explore the College’s grounds, including the Victorian Chapel, designed by the renowned architect Sir George Gilbert Scott who also designed St Pancras Station and the British Foreign and Commonwealth Office in London.

Trinity College Trinity College is the largest and wealthiest of all the Cambridge Colleges. Founded by Henry VIII, it boasts over 32 Nobel prize winners amongst its alumni and both Sir Isaac Newton and HRH Prince Charles where also students here. At Trinity College, we will have a chance to see one of the apple trees descended from the tree that dropped an apple on the head of Sir Isaac Newton. You will also have the opportunity to view the great court and the fountain that Lord Byron famously bathed in, enraging the College’s officials. Whilst at Trinity, your guide will also explain one of the biggest scandals of the Cold War – that senior members of the British Secret Service had been passing covert intelligence from the British and Americans to the USSR. The Cambridge Spy Ring, as it became known, was one of the most significant espionage failures of the 20th century, with all 5 members of the infamous group being recruited directly from Trinity College!

Grantchester Village After visiting Cambridge, we will drive back to London via the quant and beautiful village of Grantchester, which is said to have the highest concentration of Nobel Prize winners of any village in the world. Made famous by the hit TV series named after the village, Grantchester was a favourite spot of the writers Wordsworth, Tennyson, Chaucer, and Ted Huges and Sylvia Plath.

David & Chris
Thank you Henry for an amazing day out! We took this tour with Henry a few days ago and really enjoyed it. We're sometimes a bit wary of booking a private tour as a Gay couple (you never know what the guide is going to be like) but Henry made us both feel totally at ease. He collected us from our hotel, provided us with face masks and hand sanitizer, and drove us out to the Cotswolds. We were also really lucky that Henry was able to get us into places that are currently closed to the public, thanks to his relationship with the locations that we visited. He was charming, well informed, and funny. Henry was able to tell us lots of interesting facts about the places that we visited, and told us where to stand to get the best photos. Thanks for an amazing day out, will definately book with Tours of the UK again in the future.

Selina E
I spy with my little eye.... We took this tour with Chris in January whilst we were visiting after Christmas. The tour is really informative, full of great facts and stories, and even included some locations from the James Bond franchise. It was great hearing the history of the British Secret Services and their exploits during the Second World War and The Cold War. We also had no idea that Roald Dalh was a spy and had helped write the Bond films. We'll be back for the Bond Tour next time.

Eric D
Great day out with Dewi We took out grandkids on the tour with Dewi and it was fantastic. The grandkids loved every second of tour and the locations that we visited. Highly recommended for any Doctor Who fan

KingBooScaresYou
Absolutely fantastic tour! I had the pleasure of going on the Churchill walking tour today with my guide Karl. As an avid history fan I was in my element seeing the famous sites, and Karl really brought them to life. He couldn't have been more friendly, knowledgable and enthusiastic, and evidently has a real passion for history which came across in this tour. I thoroughly recommend Karl and this tour to any fellow history geeks out there! You wont be disappointed! Thanks for an amazing day!!

Karen W
Excellent value Kathryn was a great host very knowledgable about sherlock movies and other movies shot in the area. We went past the sherlock Holmes pub and many more places of interest

Natalie D
Really fun day out! I went on the Harry Potter tour with Dewi and he was brilliant. Was a really fun tour and so informative. I looooooove Harry Potter and it was so cool learning all the facts and seeing the spots of filming. Would definitely recommend!

Lauren
Absolute riot I went on a hybrid tour with Dewi at the end of the summer and it was such good fun, me and my friend (we’re the folks in the pictures in the header!) got to wander round London being absolute needs and learning about the locations of doctor who and Harry Potter and evening stopping off at some of London’s best drinking establishments. Dewi was very knowledgable and a lot of fun, would recommend in a heartbeat!

Cez1984
Dewi was a fantastic guide! Brilliant tour around lots of filming sights in London and a chance to recreate famous scenes from the film. Our guide Dewi was really informative and enthusiastic and we had a really good laugh all throughout the whole tour. Highly recommended
Tripadvisor rating score: 5.0 of 5,
based on 8 reviews.
Facebook Twitter Instagram Youtube Envelope Whatsapp
Book Now